Route of the Shutford 5K/10K

Shutford is a village about 5M West of Banbury. It is holding its first Shutford 5K/10K. It was orginally planned for 20th June 2020 but now it'll be held on 3rd October 2020. Here's a link to details about the race and how you can enter. On 17th February 2020, I had a look at the route of the Shutford 5K/10K and wrote the notes provided below. Please note that I'm not connected with the organisation of the races.

The publicity for the Shutford 5K/10k uses this map. The route of the races is shown in red. It's 5K long and so you do it twice if you're doing the 10K. You start in the village of Shutford which is at the top of the map. You then go round Round Hill and go South towards the village of Swalcliffe passing Madmarston Hill on your left. On the outskirts of Swalcliffe, you turn northeastwards and go the other side of Madmarston Hill. You then pass Jesters Hill. And then make your way to the finish (or to the start of the second lap). 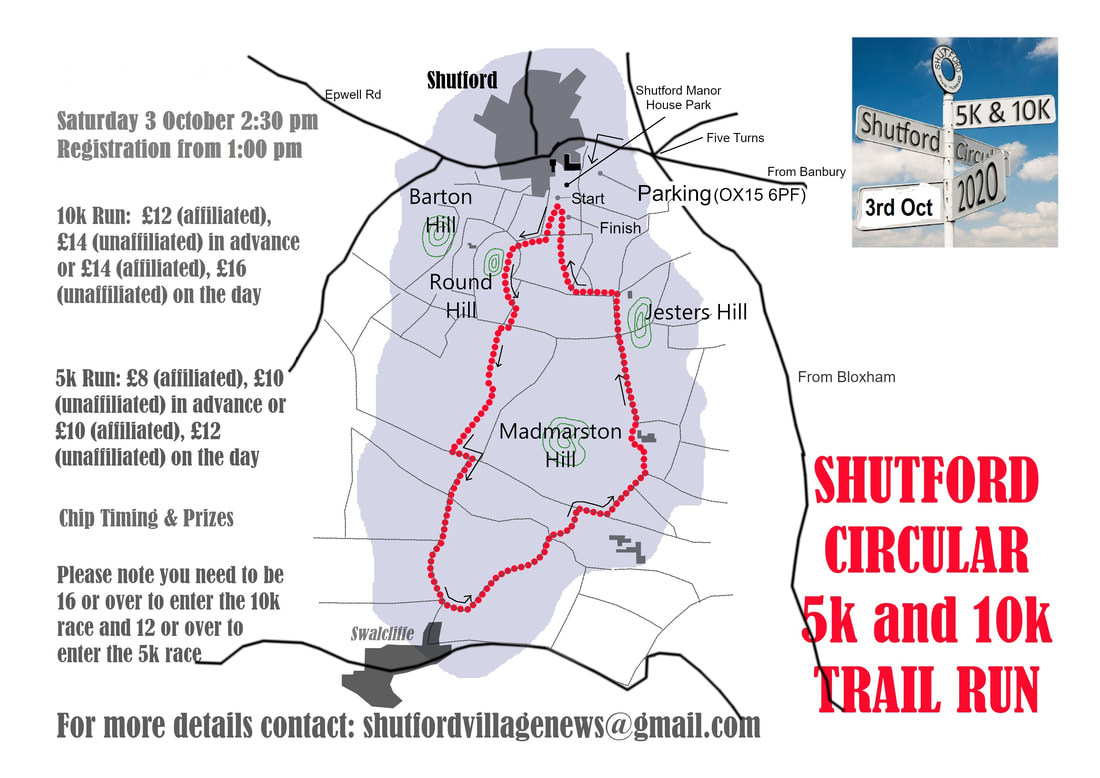 The publicity for the races also refers to this web page - it has a more detailed map that's worth looking at.

The races start in Manor Park which is next to the Manor House. They are being held in the same place and on the same day as the Shutford Festival. Here's a photo of the Festival in full swing. The photo was kindly provided by the race organiser. You&nbspcan see the Manor&nbspHouse on the right hand side of the&nbspphoto. Wikipedia&nbspsays "it&nbspwas&nbspbuilt by Sir&nbspRichard&nbspFiennes, the MP&nbspfor&nbspBanbury, between 1580 and&nbsp1600 -&nbspa&nbspdistinguishing&nbspfeature is the tall&nbspstaircase&nbsptower -&nbspand&nbspin&nbsp1928 the architect Walter&nbspTapper added a western&nbspextension and northwest&nbspwing".

The following map shows public rights of way that are bridleways in green and those that are footpaths in purple. You can see the Manor House marked on the right hand side of the map. To begin with, the race route uses a route through fields that are not public rights of way. But it soon joins up with the bridleway that goes westwards towards Round Hill (shown in green towards the bottom of this map).

That bridleway is shown in this photo. It runs alongside the hedge on the right hand side. At the end there is a gate to take you into the next field which is where the hill of Round Hill starts. However, you're lucky because instead of ascending Round Hall ...

... you turn left to follow the bridleway as it goes southwards.

You follow the hedge on the left hand side.

It takes you to a corner where you descend.

You're at the top left of the above map. Ahead of you is Madmarston&nbspHill which you'll see again later.

And to your left is Jesters Hill which you'll also see later.

I zoomed in to the top of Jesters Hill and my camera spotted the following which I'll explain later.

I moved on to the end of the field. Here's a view looking back at Round Hill.

For the next section, the race route differs from the route of the bridleway that is shown on this map.

On this map, the bridleway crosses diagonally across a field before it hits a Roman Road shown as 374/3 on the map. That's where the walkers are walking in this photo:

However, instead the race route goes alongside the side of the field next to the hedge which is shown on the above map in grey. It's to the West of the bridleway shown on the map.

At the end of the hedge, the race route turns left and then almost immediately it turns right. Throughout it has a hedge on its right. It's done the zigzag that's in the middle of the above map.

Here's the view looking back after I've reached the Roman Road.

The race route has now got to the Roman Road (shown as 374/3 on this map). It reaches 374/3 at the bottom of the stream that is on the left hand side of the map.

The race route East goes along the Roman Road (374/3) for a short bit. Prior to being a Roman Road, it was part of the Salt Way from Droitwich to London.

And several hundred years after being a Roman Road, it became National Cycle Route 5 which goes from Holyhead to Reading. So many people have used this stretch of the race route!

At this crossroads, the Salt Way, the Roman Road and NCR 5 continue straight on whereas the race route turns right to follow the bridleway South towards Swalcliffe.

Here's the view ahead. The race route is now using a hardcore path.

In the distance, my camera found the tower of the Church of St. Peter and St. Paul at Swalcliffe.

The race route uses a bridge to cross a brook. It's very full because of the recent storms.

And then leaves the hardcore path to go up a gentle slope towards Swalcliffe - you can see the Church at Swalcliffe in the top right of this photo.

The race route has got to the end of the bridleway and reached the road in the middle of this map.

Before leaving the T-junction, I zoom in on Swalcliffe.

Here's the road ahead.

... turns as it follows a stream on the right hand side.

And then the race route gently rises.

It reaches a T-junction.

Here's the view to the left where NCR goes to Holyhead.

But the race route goes right.

To the right of the race route is Lower Lea Farm. Somewhere in this area there was a Roman Villa. "It was one of the largest Roman occupation sites in the county, covering 50 acres."

The race route leaves the Salt Way, the Roman Road and NCR 5. It goes left along a permissive path that passes the trees on the left hand side of this photo.

Here's the permissive path. At the hedge in front it meets a footpath that comes in from the right.

The footpath goes through this gate.

And through this one.

Beyond it goes alongside this hedge.

This is the house of Upper Lea Farm. At this point, the race route goes through a gate in the hedge that's on the left.

And continues along this track.

And through the farm.

I passed some sheep.

After the farm, it uses this track ...

... that gently ascends. On the right hand side in the distance is Langley Hill.

To the left, you can see Malmarston Hill which we saw earlier. This is "a late Iron Age hill camp. It is the earliest known settlement in the Banbury Hundred. It was probably occupied from the 2nd century BC until the 1st century AD when it appears to have been deserted, except for a brief period in the 4th century."

But later flattens out. There's a barn on the right ahead.

The barn is Jester's Barn. See the strange gate on the right.

If you look right when you see this strange gate, you'll see Jester's Hill and on the top you might see this.

You may recall that earlier I zoomed in to the top of Jesters Hill and my camera spotted the following. This is Shutford Beacon that was erected to commemorate the 50th anniversary of VE Day. To the right of the Beacon there is a trig point that the map says is at 178m above sea level.

Here's a better photo that was taken on Jester's Hill. It was taken by Richard Webb who has kindly released it with a Creative Commons licence.

At this point the village of Shutford comes into view, and so you know it's not far to go!

Here's the track ahead.

I heard some birds singing in these trees but I guess your fellow runners will have frightened them away (unless you're at the front)!

You're aiming for that hedge ahead.

You need to go through this hedge to get into the next field. However, when you get to the hedge, I think the race goes left probably to avoid you having to cross a stile! I guess that's wise as stile-climbing would not be nice/wise at this point as you'll probably be tired!

When you turn left before the hedge, you have another look at Round Hill which you saw on the way out. I think the race route goes alongside the hedge ...

... that has a view of Shutford Church.

At some point you veer away from the path alongside the hedge and head for the finish which is on the right in this direction which is near to the Manor House.

Time to relax! The races are on the same day as the Shutford Festival. This&nbspphoto was nicked from their web&nbspsite.

Or there's lots to see in Shutford. Cherwell District Council provide a leaflet that describes a circular walk around Shutford. (This map has the Manor House on the bottom right of the map.)

.
Church Lane (at the bottom of this map) has these cottages:

I had a look at St Martin’s Church which "dates from the 12th century with additions made throughout the Middle Ages".

Here's the inside of the Church.

Or you could go to the George & Dragon which is next door to the Church and have a pint of Hooky!

Here's a link to more details about the pub.

The maps on this web page that I've used to show the race route have been obtained from this map which is provided by Oxfordshire&nbspCounty&nbspCouncil. I'm&nbspgrateful to them for providing this map.

I maintain a web page for runners that provides a list of races near Oxfordshire and the latest results. Visit www.oxonraces.com and follow @oxonraces